Despite earning a Golden Raspberry Award for Worst Original Song (the only award Thumbelina picked up), I really like the song “Marry the Mole.” As the title implies, the song features Mrs. Fieldmouse (Carol Channing) convincing Thumbelina (Jodi Benson) as to why she should marry Mr. Mole (who is admittedly very wealthy but also cynical and blind as a bat). From Mrs. Fieldmouse’s point of view, love is highly overrated and it is far better to marry someone who can take care of you financially. I think Mrs. Fieldmouse really believes she wants the best for Thumbelina (even if she does call her stupid more or less later in the song) but it’s still depressing to think of a life where you marry someone ONLY for their money. After all, what’s the good of being fabulously rich if you’re locked up in a dark hole way underground?

Ms. Fieldmouse: Love? Love is what we read about in books, my dear.

“Here Comes the Bride” is a lovely little ditty

But marrying for love is a foolish thing to do

True, it’s a fact, that he’s not exactly witty

He’s blinder than a bat, but at least his eyes are blue

His breath may be alarming, but he’s charming, for a troll

Were very much in love when they were wed

They honored every vow; so where are they now?

I hate to seem a pest, but I know what’s best for you

Just think of all the ways that you can decorate a hole! 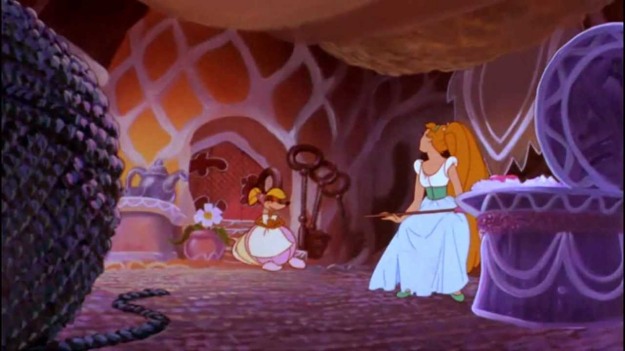 M is for money!

I both love and hate that Mrs. Fieldmouse uses Romeo and Juliet as an example of why you shouldn’t marry for love. On the one hand, as soon as she mentions the couple you know where that verse is going (the lovers wind up dead). But then again, Romeo and Juliet is about the worst example of “love” you can possibly choose. Allegedly, Romeo and Juliet meet and fall in love in a matter of days (and that’s being generous), get married and promptly kill themselves (that’s an oversimplification but more or less accurate). They barely knew each other so it’s doubtful they truly loved each other (but then again one could also make that argument about Thumbelina and Cornelius’s love since they’ve only met once but that’s besides the point).

What do you think about “Marry the Mole”? Let me know your thoughts about this song in the comments below and have a great day!