My general opinion of The Last Jedi has changed a great deal since I first saw the movie in 2017, but one thing that hasn’t changed is my love of the film’s soundtrack. It’s been my longstanding opinion that the Star Wars soundtrack as a whole is one of the greatest film music creations ever made and the music for The Last Jedi is up there with some of the best themes Williams ever created.

“The Spark” is one such theme and one I’ve wanted to talk about for a while. It occurs very late in the film, when Luke Skywalker appears out of nowhere in the remains of the Rebel base on Crait. Most of the cue, starting around 1:00 is actually from a Return of the Jedi theme known as “Luke and Leia” and plays when Luke finally reunites with his twin sister. You would know this as the music that plays in ROTJ when Luke reveals that Leia is his twin. It’s pretty much the same theme all over again and it really is perfect for this scene that happens to be the first and sadly, only, time we see Luke and Leia together in the sequel trilogy (everything after this was done with body doubles and CGI so it doesn’t really “count” for me if that makes sense).

After this memorable theme runs its course, then the fun really starts. Starting around 2:15 the music begins to morph into something different but it doesn’t latch onto the new theme until around 2:30. From that point on, the music enters a weird march-like motif that might sound odd at first, or vaguely familiar depending on your point of view. There’s a deep, booming motif that repeats over and over again as Luke strides out to confront the First Order and his wayward nephew Kylo Ren. As you listen to it, you might realize that this is actually from the bass line of The Imperial March, known the world over as “Darth Vader’s theme.” 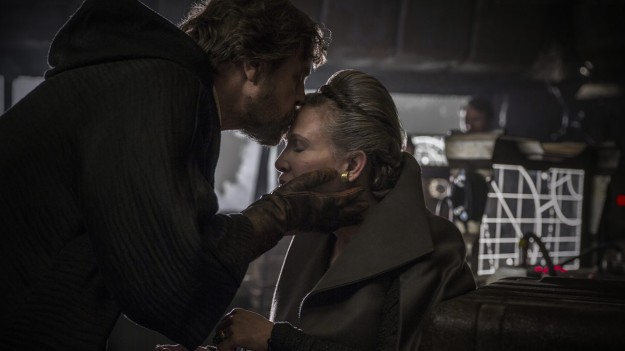 Think of the symbolism in this choice on the composer’s part. We have Luke Skywalker, Jedi, hero of the Rebellion, etc. and so on, marching out to face the evil First Order to more or less the tune of the Imperial March. I don’t know if it’s merely ironic or also meant to send a message, maybe something to the effect that it’s Luke who has the power and authority that Kylo has always sought but will never find because he’s too much of a hothead. It could be I’m thinking too much into it but it always sends chills down my spine to hear the remnants of that immortal theme when Luke walks out, all alone, to stare the enemy down.

Some people gave John Williams a lot of flack for not creating a new Imperial March or something equivalent for the sequel trilogy, but I really feel he didn’t need to, and “The Spark” is a prime reason why. It’s a combination of the old and new that lends sadness and power to this scene in a way that only Williams can make possible.

Enjoy listening to “The Spark” from Star Wars: The Last Jedi. Let me know your thoughts about this moment in the comments below and have a great day!

The Empire Strikes Back: “The Imperial March” by John Williams

Star Wars: The Force Awakens “March of the Resistance” (2015)