Geppetto the toy maker is overjoyed to find that his wooden puppet Pinocchio has come to life. And though he is not yet a “real” boy, he treats him as his own son regardless and decides that Pinocchio needs to go to school, since that’s where all good little boys go during the day. After some persuasion, Pinocchio sets off with his new school books and a spiffy little vest to go with his regular outfit. Though he’s meant to be his conscience, Jiminy Cricket is nowhere to be found as yet.

On the way to school, Pinocchio attracts the attention of a fox and his cat companion, who can hardly believe that they’re seeing a puppet walking and talking without strings! The fox stops Pinocchio and introduces himself as “Honest” John (his full name is John Worthington Foulfellow) and the cat, who doesn’t speak, is Gideon. Pinocchio informs the pair that he is on his way to school, but Honest John (voiced by Walter Catlett) says that this is a ridiculous notion. 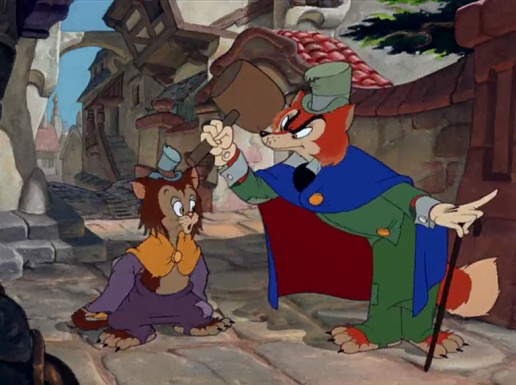 Why should this young boy be going to school when it’s perfectly obvious he’s a natural actor (said with a wink and a nod to Gideon who quickly understands where Honest John is going with this conversation). The pair quickly divert Pinocchio from his path to school and begin describing the wonderful life he could have as an actor and this is the subject of “Hi Diddle Dee Dee (An Actor’s Life for Me!):

Honest John paints the rosiest picture imaginable: if Pinocchio goes off to be an actor, he’ll be fantastically rich and able to do anything he wants! He’ll wear the finest clothes, be able to buy out candy stores, it’s a grand life! The puppet is easily persuaded to follow the fox and cat to the theater (in this case the travelling puppet theater owned by Stromboli), all thoughts of school and being a “real” boy forgotten for the moment. Of course the naive puppet has no way of knowing that this “actor’s life” wouldn’t apply to him, not where he’s going anyway. Pinocchio doesn’t know it, but Honest John and Gideon are on their way to sell the young puppet to Stromboli for however much they can get from the Italian (it’s rather disturbing when you think about it). 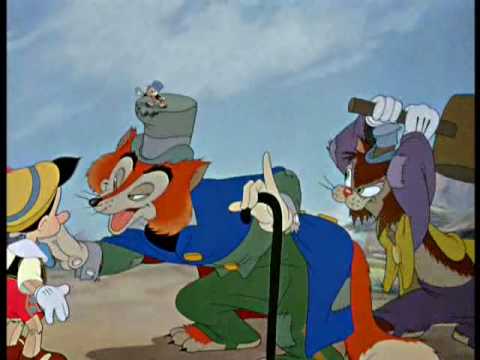 And where is Jiminy Cricket? It turns out the newly minted “conscience” overslept on his first day and now he’s racing to catch up to his charge, figuring that Pinocchio couldn’t possibly have gotten into too much trouble yet (oh how wrong he is!!) The trio quickly passes him in the street and Jiminy is stunned to see Pinocchio walking with the fox and cat in the opposite direction of school! The cricket chases after them, but being so small, he is unable to make them stop and they journey on to Stromboli’s.

“Hi Diddle Dee Dee” is notable for being the first Disney villain’s song ever performed. Originally, Gideon was going to have a voice too (in fact the legendary Mel Blanc was hired to record his lines), but it was later decided to make the cat a mute comedic figure similar to Dopey and so all of Blanc’s lines were cut except for a few hiccuping sounds. I’d also like to point out that the song uses “gay” to mean “happy/wonderful” (just in case there was any confusion).

What do you think of “Hi Diddle Dee Dee”? It’s a rather short but enjoyable song (and certainly not what you picture for a “villain’s” song. Let me know your thoughts about the song in the comments below!

For the more disturbing aspects of Pinocchio, see also: