I think one of the best parts of The Road to El Dorado is when Miguel and Julio set off to follow the map to the legendary lost City of Gold. Their journey is told through a travel montage as the pair sing about all of the amazing things they’re going to do as they blaze a trail to El Dorado.

Look out new world here we come
Brave, intrepid and then some
Pioneers of maximum
Audacity whose resumes
Show that we are just the team
To live where others merely dream
Building up a head of steam
On the trail we blaze

Paradise is close at hand
Shangri-la the promised land
Seventh heaven on demand
Quite unusual nowadays
Virgin vistas, undefiled
Minds and bodies running wild
In the man behold the child
On the trail we blaze

During the song, the story sees how Julio goes from being a complete skeptic in the existence of El Dorado to a total believer as they encounter sign after sign that corresponds to the map they’ve been following. It’s also funny to see all the bad things happening to Julio during the journey (leeches, being bit in the rear by a piranha), while all the cool stuff (mostly) happens to Miguel.

Also, I completely forgot that there is straight up nudity in this sequence! Granted we only see Miguel and Julio from the backside, but there’s absolutely nothing blocking the view of said backside during the seconds they’re in view. It just totally caught me off guard because I wasn’t expecting it.

Rewatching this segment reminds me why I liked this film so much the first time I saw it nineteen years ago (holy crap I feel old just typing that out). This song serves as a perfect transition from Miguel and Julio’s arrival to the New World to their proper introduction to El Dorado.

What do you think of “On the Trail We Blaze”? Let me know your thoughts in the comments below and have a great day!

While it wasn’t a big hit at the time, 17 years later there is still a soft spot in my heart for The Road to El Dorado. The story follows two Spanish con-men, Miguel (Kenneth Branagh) and Tulio (Kevin Kline) as they accidentally stow away on the ship of Hernan Cortes on his way to conquer whatever empires of the New World he may come across, and end up discovering the legendary city of gold, El Dorado, where they are mistaken for gods.

(I wrote about one of the film’s songs here)

Miguel and Tulio are initially content with their plan to amass as much gold as possible and then sailing away to “ascend to the heavens” in a boat they’re having the residents of El Dorado build for them, but complications quickly begin to emerge. For one, Miguel is quickly becoming enamored of life in the hidden city. And, as he points out to Tulio, leaving to live like a “king” somewhere else would be a step-down from “god.”

For another, the high priest, Tzekel-Kan, is suspicious of the pair as they do not behave as the gods are supposed to (nor are they supposed to bleed as Miguel does after cheating to win a ball game) and is determined to expose the two as frauds. There’s also the looming threat of Hernan Cortes, who will surely destroy El Dorado and enslave the populace if he can find it.

And yes, I admit, the music has something to do with why I like this film as much as I do. With the orchestral score composed by Hans Zimmer, the music is a blend of Spanish sounds (heard mostly in the beginning of the film) and a “New World” sound that takes over once Miguel and Tulio discover El Dorado. I was delighted to discover a full length behind the scenes look at creating the score for this movie, with thoughts from Hans Zimmer, Elton John (who worked with Tim Rice on the songs) and also Kevin Kline and Kenneth Branagh, the voices of Miguel and Tulio.

If you haven’t given The Road to El Dorado a try, I sincerely hope that you give the movie a chance. It has terrific animation and, as I’ve said, a wonderful musical score.

Waaaaaay back in the year 2000, DreamWorks Animation released an animated comedy entitled The Road to El Dorado. Taking inspiration from the Bob Hope/Bing Crosby “Road to..” films, El Dorado tells the story of two swindlers named Miguel (Kenneth Branagh) and Tulio (Kevin Kline), who end up winning a map to the fabled city of gold “El Dorado.” After unwittingly stowing away on the ship of conquistador Hernan Cortes (Jim Cummings), the pair (accompanied by a horse) escape and make landfall in the New World. There, the two use the map and successfully locate the city deep in the jungle. Conveniently, Miguel and Tulio bear more than a passing resemblance to the two gods who created the city in the first place, and the pair are hailed (after a rocky start) as deities, with the entire city at their disposal.

During their first night in the city, the Chief throws a huge party for the “gods.” While Tulio is skeptical about this whole “being a god” thing, Miguel, the eternal optimist, loves it, and swears that being a god is the easiest thing in the world! This is how “It’s Tough to Be a God” begins.

I hardly think I’m qualified
to come across all sanctified.
I just don’t cut it with the cherubim

Tulio, what are you talking about?!
There again, they’re on their knees.
Being worshiped is a breeze which rather suits us in the interim.

It’s tough to be a god.
Tread where mortals have not trod.
Be deified when really you’re a sham.
Be an object of devotion,
be the subject of psalms.
It’s a rather touching notion,
all those prayers and those salaams.
And who am I to bridle
if I’m forced to be an idol?
If they say that I’m a god, that’s what I am.

I think the title of the song is somewhat tongue-in-cheek, because while the pair bemoan how tough it is to appear godlike, all you really see is the two having a good time, partying and drinking the night away. I love listening to these two sing, Branagh and Kline are great together. The style of the music is very much in keeping with what you might expect from a Disney musical (even though this is DreamWorks) and the animation is gorgeous! In fact, this is my favorite song from the film, considering it’s the one I remember the most.

There is one spoken verse where Tulio reminds Miguel that if they DON’T pull off this “god” gambit, then they could very easily be sacrificed (i.e. killed) to the real gods.

What’s more, if we don’t comply
with the locals’ wishes,
I can see us being sacrificed or stuffed.
You have a point, yes, that’s very good thinking.
So let’s be gods; the perks are great.
(Yeah.)
El Dorado on a plate.
(Thank you!)
Local feelings should not be rebuffed.
Never rebuff, never rebuff a local feeling, no my friend.

It’s tough to be a god, but if you get the people’s nod,
count your blessings, keep ’em sweet, that’s our advice.
It’s great advice!
Be a symbol of perfection.
Be a legend!
Be occult! Take their praise, take a collection as the multitudes exalt.
Don a supernatural habit
We’d be crazy not to grab it!
You got it!
So sign on two new gods for paradise… par-a-dise!

Miguel acknowledges Tulio’s point, but doesn’t seem overly concerned, and why not? Right now the entire city believes they’re gods. It seems that the pair should have no trouble collecting as much gold as they like and eventually leaving when the time is right. 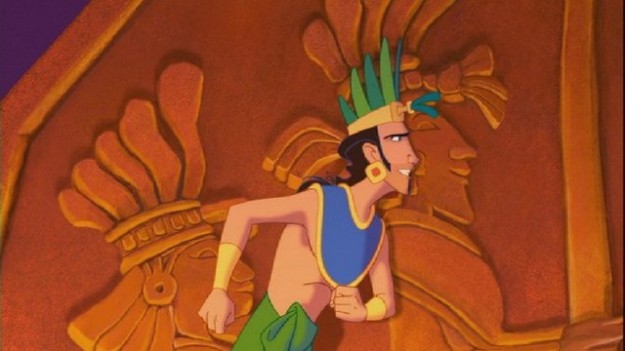 But considering this is a movie, you KNOW things aren’t going to be nearly that simple. Hopefully Miguel and Tulio enjoy this night of partying, because things get really hairy starting the next morning (but that’s a story for another time).

If you’ve never seen this movie before, don’t let it’s reputation dissuade you, it’s a really fun experience, everyone should see this movie at least once. For now, enjoy “It’s Tough to be a God.”

*All images are the property of DreamWorks Animation

For more Disney and other animated soundtracks, see here