Partition is a very sad story, set in 1947 during the partition of India (when Pakistan was created as a Muslim nation). It is based on the Romeo and Juliet story type, where two people fall in love even though it is forbidden. In this case, a Hindu man, Gian Singh, slowly falls for Naseem, a Muslim girl, even though all the rules of their respective religions forbid this.

With Naseem separated from her parents and Gian finding himself responsible for her, the pair end up bonding over their mutually traumatic pasts and get married, having a son named Vijay. Things become complicated when word arrives that Naseem’s family is actually in a certain village in the newly formed Pakistan. Naseem leaves to visit, promising to return in a month, but her family is so infuriated that she’s married a Sikh that they lock her in a room and forbid her from returning to India. Gian is determined to rescue his wife, so he disguises himself as a Muslim and crosses into Pakistan.

After a disastrous attempt to rescue her, Naseem’s mother recognizes that her daughter really does love Gian and she lets her out so she can catch her husband at the train station. But just as the couple is able to reunite, Naseem’s brother Akbar pushes Gian onto the train tracks and he is killed by the approaching train, to the horror of Naseem. While the police arrest Akbar for murder, Naseem and Vijay are able to escape to England and make a new life. 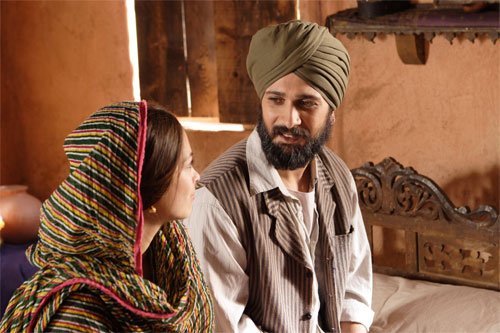 What makes this film notable for me is that it features a score by Brian Tyler, who is rapidly becoming one of my favorite film composers. This behind the scenes video shows Tyler at work in the studio, annotating his score and recording with a rough cut of the film playing on a screen in front of him. He also worked with the Hollywood Studio Symphony for recording the score as well.

One big thing with the music that Tyler wanted to create is, that while there is a sense of Western music in the score, there is also a frequent callback to the sound of India as well. He wanted to create the feeling that you (the audience) have been transported through time to this very traumatic period in the history of India and Pakistan.

There is something magical about watching Brian Tyler on the podium conducting his music, I definitely need to hear more of this score now. If you’ve seen Partition, I would love to know your thoughts on the film and the score in the comments below.